What is Europe Day and is anyone celebrating?

Europe Day, observed on May 9 each year, marks the presentation of the Schuman Declaration in 1950, which proposed the creation of a European Coal and Steel Community, the forerunner to the European Union.

What was the idea behind the community?

The idea of the community was that its founding members – France, Germany, Italy, the Netherlands, Belgium and Luxembourg – would pool their coal and steel resources and create a common market for them by lifting import and export duties.

But it was also political. The idea was that by merging the economic interests of France and Germany together, it would reduce the risk of conflict in the future.

The declaration reads: “The solidarity in production thus established will make it plain that any war between France and Germany becomes not merely unthinkable, but materially impossible.”

The treaty governing the community was signed in Paris in 1951 and came into force the following year.

The original six deepened their economic integration with the establishment of the European Economic Community, with the signing of the Treaty of Rome in 1958.

The Single European Act of 1985 set the objective of creating a single common market, while the Maastricht Treaty in 1992 saw the birth of the European Union, then featuring 12 countries, and set the path to economic and monetary union.

Who is celebrating Europe Day?

A quick online glance at the main institutions of the European Union reveals many feature articles or tweets on Europe Day.

The dedicated Europe website for europeday.europa.eu boasts of plans to hold more than 140 activities across the bloc, to celebrate. Nearly half of those listed are taking place in Belgium, home of the European Union’s HQ.

There is also a sense that the Brussels machinery is slightly reluctant to force the EU down people’s throats, at a time when the European project is facing major challenges, around migration, security, the economy and anti-EU sentiments in some parts of the bloc. 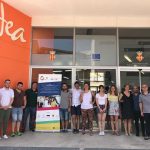